Mexico’s revamped CAA are now planning on ramp checking each and every foreign aircraft operating Part 91 or Part 135 flights to airports in Mexico.

That’s according to local handling agents, who received the directive from the authorities on 19th Nov 2019.

And yes, you read that right: ramp checks will be carried out on all flights, at all airports.

It’s not yet clear when this new policy will be fully implemented. Inspecting each and every aircraft at all airports would be a mammoth undertaking – most likely impossible. But one thing is clear: we can at least expect the frequency of ramp checks to increase significantly in the near future. 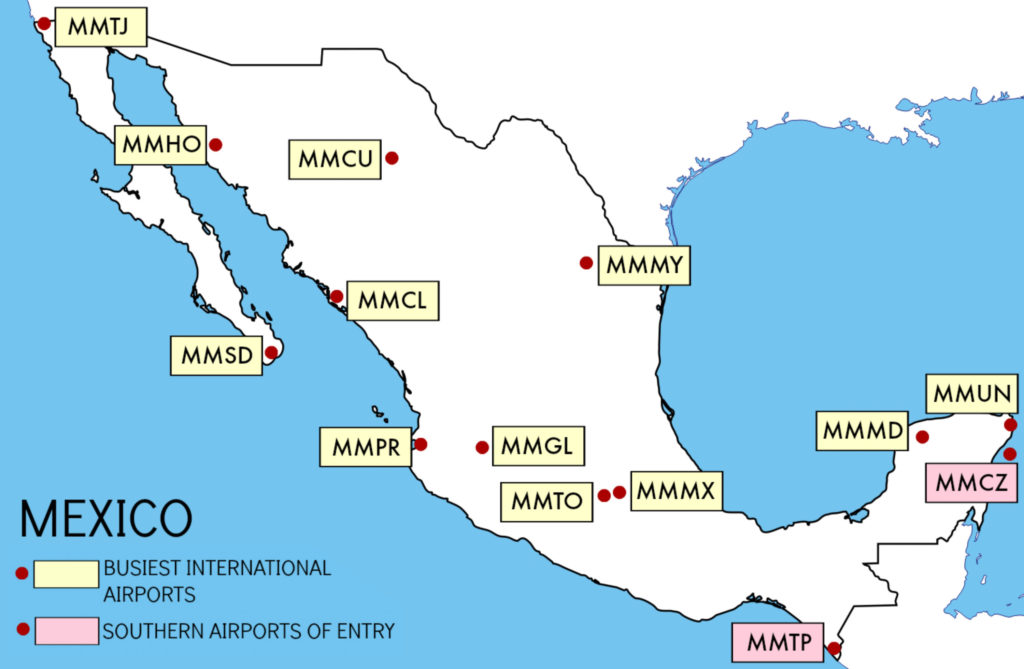 On 16th Oct 2019, the Civil Aviation Authority in Mexico (DGAC) became the Civil Aviation Federal Agency (AFAC), and their bureaucratic transmogrification seems to have imbued them with a renewed appetite for casting a cold eye on international operators.

They’ve dipped their toe in the water once already this month, with the recent announcement that there will now be additional requirements for Part 135 operators applying for permits for ad-hoc charter flights to Mexico: original notarised power of attorneys, documents stamped with apostilles, and other such tedious things. More on that here.

There was a surge of increased ramp checks in Mexico earlier this summer. The official line then was that this was instituted to ward off cabotage, although there was some speculation that it may have been in response to the crash of an N-reg aircraft near MMMY/Monterrey in May 2019.

Either way, the authorities now seem to have a taste for more, and with the transition from DGAC to AFAC now complete, close attention should be paid to developments.

With ramp checks now firmly on the menu for the foreseeable future, one of the main handlers in Mexico, Manny Aviation, has written-up a list of documents that they recommend should be carried on board flights to Mexico:

1) Airworthiness Certificate
2) Registration Certificate
3) Worldwide and/or Mexican Insurance stating Private use when flying Far Part 91 and Charter use when flying Far Part 135. When flying Far Part 135, it is mandatory to have both insurances: worldwide and Mexican.
4) Pilot’s licenses: both sides and stating aircraft type rating.
5) Pilot’s medical certificates: valid document according to crew role (Pilot in Command or Second in Command), type of flight and according to pilot’s age.
6) If holding Multiple Entry Authorization (MEA), this document and its corresponding payment receipt, must be on board.
7) For Charter operations, the following additional documents are required:
a. Valid Air Operator Certificate (AOC): Copies are accepted considering this document might include many tail numbers (fleet). Payment receipt should also be included.
b. FAA OST 4507 FORM copies are accepted considering this document might include many tail numbers. Alternatively, the appropriate exemption document, Certificate of Public Convenience and Necessity is also accepted.
c. If holding a Mexican Indefinite Blanket Permit (IBP), this should be accompanied by the Mexican AOC, and the Yearly Verification (including payment receipt) for it to be considered valid. Copies are accepted considering this document might have many tail numbers.
8) The logbook (maintenance logbook) stating the most recent information about maintenance performed on the aircraft.
9) The authorization to operate as a mobile radio aeronautic station; (Aircraft radio station license/authorization).
10) The Flight Manual.
11) Noise Certificate.
12) The Minimum Equipment List (MEL) when the type certificate indicates it.
13) Mexican AIP.
14) The preflight checklist.
15) If full or partial (inbound/outbound Mexico) route involves overflying the ocean, then a life raft and/or life jackets are required to be on board, according to the type of aircraft. Please note this is also a usual requirement, but Mexican CAA will also be double checking for this
16) Weight and Balance Manifest.
17) First Aid Kit.
18) Jeppesen Manuals, (at least electronic format).
19) If operating Far Part 91 – Private flights, it is required to present a document stating the purpose of the flight, to include the name of the lead passenger and to declare its connection with the aircraft (owner, employees, etc). If accompanied, letter must declare the relationship of the passengers with the lead passenger (family, friends, employees, etc). This will prove there is no commercial purpose under any circumstance. To present this letter, having it notarized is not necessary.

Manny Aviation add the following: “While there is no formal list of requirements to be presented at the time of inspection, those mentioned above are highly recommended. It is very important to be clear that AFAC has not provided a checklist per say, so it falls on the criteria of each inspector. They might ask for more or fewer documents than listed above.”

“These inspections are random on any foreign aircraft. Whether operating Private or Charter, operators will have to prove before AFAC if their flights are Private or Charter, as applicable, by their countries of origin. Regardless of whether landing authorizations are single or multiple, inspection will still apply.”